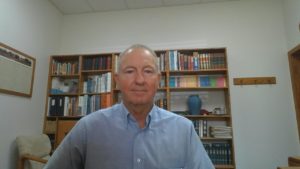 Pastor Terry Rediger grew up on a farm in South Dakota.  After high school he moved to Salem, OR, and attended Chemeketa Community College.  He then served for 2 years in Mennonite Voluntary Service in La Junta, CO, where he developed a desire to study the Bible.  He followed that desire by attending Goshen College, IN, and Associated Mennonite Bible Seminary, Elkhart, IN.  It was at Goshen College that Terry met his wife Jerilee and they have 2 grown children and 3 grandchildren.  Terry has served God in Mennonite Churches in Illinois, Iowa, Washington, Oklahoma, and now Western Mennonite Church in Salem, OR. Besides ministry, Terry enjoys eating out with Jerilee, riding his motorcycle, reading mystery novels, camping, being out in nature, and watching his grandchildren grow.