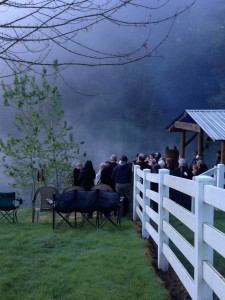 Our Easter celebration began early at 6:30 AM in the morning on Easter Sunday, April 5, 2015. The weather was crisp and there was even a hint of frost on some of the grass as we gathered to watch the sun come up over the lake. Pastor Rick opened the time by reading from Luke 24:1-9. When he was finished, one of the church members presented a dramatic monologue called, “One of the Crowd,” depicting a woman who was part of the crowd the week before who had shouted, “Hosanna!” and then a week later was part of the crowd who shouted, “Crucify Him!” At the end of the drama, she was greeted by two other young women who had gone to the tomb with spices and perfumes, but found the tomb empty and then saw an angel who said, “Why are you looking for the living among the dead? He is not here; He is risen!” The two young women excitedly relayed the story to the first woman, who realized that because of what Jesus did on the cross and because He is risen, her sins were forgiven! The drama ended with the three women running to tell the other disciples the Good News!

Following the drama, the group that had gathered, made their way down to the dock on the lake to witness the baptisms of two women who publicly wanted to declare their acceptance of God’s grace and forgiveness through Jesus and their love for Him. Even though the temperature outside was only 37 degrees Fahrenheit, they, along with those who baptized them braved the chilly waters of the lake while the rest of the group looked on. After each baptism the crowd of witness applauded and gave thanks to God. Hallelujah! What a Savior!

A delicious Easter Breakfast potluck followed the Sunrise Service back at the church. It was quite a feast with 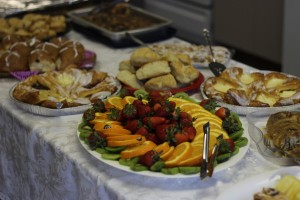 assorted sweet rolls, breads, fruit, and a number of delicious egg casserole combinations. After breakfast the youth ages 0-18 had an Easter egg hunt. Each egg they found contained a number. Some of the numbers were associated with prizes and some where “duds.” Once the eggs were found, each young person excitedly announced their numbers and enjoyed picking out prizes. 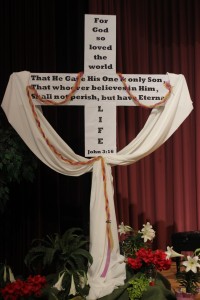 The worship service was filled with lots of singing as everyone in attendance was invited to be “the choir.” A combination of traditional hymns, such as, “Christ the Lord is Risen Today!” and “Low in the Grave He Lay” and contemporary Easter songs, such as “My Redeemer Lives!” and “Glorious Day!” were sung. Pastor Rick preached an encouraging and challenging sermon ending with the admonition to “take Jesus with you and share Him with those around you.”

All of the events of the morning contributed to a wonderful Resurrection Day celebration.